Feel the Excitement of Catching Icefish

In Soyangho Lake, there is a icefish village located in Nam-myeon, Inje-gun, Gangwon-do. When the water of Soyangho Lake freezes during the winter time, Inje-gun is crowded with tourists catching icefish. The tourists make a hole on an ice and try to catch icefish with fishing rods in the ice. People 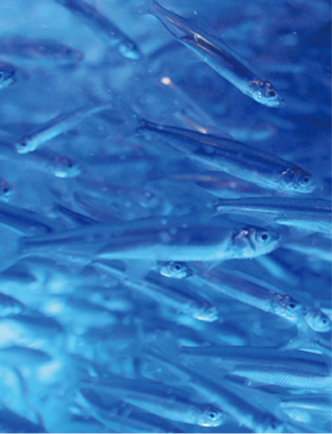 To catch an icefish, you need a troll. The fishing lines have several small hooks and the sinker is tied under the hooks while float is tied above the hooks. In icefish fishing, maggots are used as the bait. Since the maggots are raised for bait, they are clean. When you have all fishing tools, make a hole in an ice, put rod, and wait for the sign. When you are lucky, you will catch fish for sliced raw fish, fried fish, and spicy fish stew. Since icefish is nocturnal, they are usually caught before 10:00 AM and after 4:00 PM.

The most common way to eat icefish is enjoy as it is. You eat alive icefish by dipping it in red chili-pepper paste and put it in your mouth. Many people don't preper to it that way because of the texture. However, when you get used to the delicate scent of cucumber and cruncy texture of icefish, you will wait for the winter time. The taste of icefish differs based on the size of the icefish. When the icefish is too big, it is less tastier because of the bone. However, when the icefish is too small, it is not enough to enjoy the unique cucumber scent of the icefish. Next common way to eat icefish is by frying it. However, the delicate taste of icefish gets covered by the thick frying oil and it is hard to enjoy the true taste of icefish when it is fried. You can also enjoy icefish by seasoning with various vegetables or making spicy fish stew.

Although icefish belongs to osmeridae family, it lives in the freshwater. Fish of osmeridae family is largely divided into fish living in ocean and living in clean water. Smelt (candlefish) usually sold at Japanese restaurants is a type of icefish. Smelt usually lives in ocean and moves to freshwater during the breeding season. Such type of breeds moving over ocean and freshwater live in the northern district and it is hard to find them in the Korean Peninsula. However, icefish found in reservoir and lake of Korea cannot go to the ocean during the breeding season and that's how they formed the current ecosystem. It's like how river salmon becomes a trout when it cannot go out to the ocean.

Icefish is called 'Fairy of Lake' for its shining and transparent silver body. Icefish also has big eyes and slim figure. Icefish runs fastly in the water. That's why icefish is compared to Tinker Bell from Peter Pan. However, icefish would have got got the name 'Fairy of Lake' pretty recently as the concept of fairy started from the western culture and the name 'fairy' would have been spread to Korea after the Joseon Dynasty.

Icefish has various names. In Jeolla-do regions, icefish is called freshwater anchovy or anchovy while Chungcheong regions call icefish by gonger. Also, Gyeonggi and Gangwon regions call icefish as anchovy, capelin, while some part of Gyeongnam region call icefish as Okasaki or Akasagi. Some regions call icefish by Japanese name because icefish was widely spread during the Japanese colonial period. According to Jeoneoji written by Yugu Seo (1764~1845) who was a scholar of Realist School of Confucianism during the late Joseon Dynasty, the record about icefish states that "Icefish is found around November and December and it is caught by making a hole on an ice and using a casting net. After February or March, icefish changes into blue color and it disappears when the ice melts". According to Japanese record, icefish is written as 'Gonger' in Chinese Character as icefish was given as the tax for the 11th general, Tokugawa Ienari by Azabu, Hitachi Province. It is assumed that some Korean regions call icefish as 'Gonger' due to influence from Japan. In 1925, the Japanese government released the eggs of icefish caught in Yongheung River of Hamgyeongnam-do and cultivated icefish as the fishery resource. After the independence of Korea, the icefish release business continued. Japanese especially love icefish and Korean icefish is exported to Japan.

In spring, summer, and fall, icefish lives in the deep water. Since icefish is a cold water fish, it does not come up to the warm water. During the seasons, icefish does not get bigger and it is not caught with nets. In the winter time, icefish sharply gets bigger. Icefish reaches up to 15cm and it gets bigger to prepare for the breeding season. When the water freezes, it moves to upper water and active right under the ice. Then, icefish spawns eggs before spring comes and dies. Icefish usually live for one year and some live up to 2~3 years.

Icefish is found in freshwater around the Korean Peninsula. After the fishery resource business during the Japanese colonial period, icefish became widely spread. However, since icefish is a cold water fish, icefish living in upper regions has a clearer taste and firm flesh. Especially, icefish from Soyangho Lake and Chuncheonho Lake of Bukhangang River is said to be the most delicious. When catching an icefish, a fisherman cuts an ice, throws net inside the hole while an angler makes a hole on an ice and catch icefish by fishing. Icefish's biggest charming point is that it is easy to catch without any special technique. Therefore, many tourists visit icefish fishing site with their families to enjoy the excitement of catching icefish.